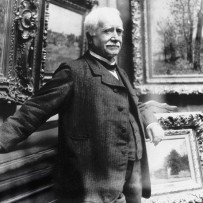 It has already been eleven years since Claude Monet and Paul Durand-Ruel know each other and work together, when the art dealer writes to the artist on May 26th, 1882,” My Dear Mister Monet, You have flowers and magnificent trees in front of your eyes at this time of year. Do not let this invaluable moment escape. If your house in Poissy brings you bad luck and makes you all every sick, there is a very simple way to find a solution. It is to leave and to settle somewhere else. It is better to lose some rents and to preserve your health. ”
The year after, in 1883, Monet settles down in Giverny. Giverny then becomes the creative place where the artist doesn’t stop evolving: the garden which he draws, the greenhouses which he creates, the plants which he chooses, the studios which follow one another and, of course, the masterpieces which these places inspire him.

Monet’s third workshop, photograph taken in Giverny in November, 1917 by Joseph Durand-Ruel (son of Paul Durand-Ruel). Giverny is glorified by Monet thanks to his poppies, his meadows, his white water lilies, his haystacks, his Japanese bridges… These landscapes will travel and will be later recognized internationally due to and among others, by his art dealer and friend, Paul Durand-Ruel. Paul Durand-Ruel, who defends Monet’s work since their first meeting in London in 1871, does not hesitate in presenting to the Americans from 1886 the paintings of the impressionistic artists, among whom the works painted by Monet in Giverny such as, Landscape in Giverny, The Poppies, The Seine in Giverny, Spring in Giverny. Monet is in reality, very worried to see his paintings leave for the country of the “Yankees”, but has confidence in his art dealer to whom he entrusts his paintings. Paul Durand-Ruel, whose idea is «to revolutionize the New World at the same time as the Former” as he writes it to Pissarro on May 19th, 1883, is finally right. His first exhibition in 1886 in New York is a success; the impressionistic artists receive their first official consecration. The paintings of Monet, Manet, Morisot, Renoir, Pissarro, Cassatt, Degas, Sausage, Sisley, among others, are finally appreciated.

The first collectors of the impressionistic painters are the Americans; such as, for example, Havemeyer, Vanderbilt families, Davis, Spencer, Lawrence, Kingman, or the Potter Palmer families and Ryerson of Chicago, or still the Crocker families of San Francisco. Little by little, the Europeans begin to recognize the talent which emanates from these paintings considered “not finished”. Durand-Ruel multiplies the exhibitions and the landscapes of Giverny are present in numerous of them thanks to the masterpieces of Monet. Among these prestigious exhibitions let us quote the one organized in 1909 in the Parisian gallery of the art dealer, offering to the eye of the spectator a series of White water lilies, that is 48 landscapes of water painted in the garden of the artist. The” all Paris Elite” will be there and the writer Jules Renard will note in its personal diary: ” it is too lovely: nature does not give that effect”.

Photograph of one of the shows of one of the numerous exhibitions of Claude Monet’s works organized by Durand-Ruel. This photograph taken in the Durand-Ruel gallery in New York, exhibition from 1st till 16 February 1915, presents, on the left, a picture illustrating Monet’s Pond with white water lilies and the Japanese Bridge in Giverny.

Photograph taken in Giverny at Monet’s by Joseph Durand-Ruel (son of Paul Durand-Ruel); from left to right: Germaine Hoschedé (daughter-in-law of Monet), Madam Joseph Durand-Ruel, Lili Butler granddaughter of Monet, George Durand-Ruel (brother of Joseph) and Claude Monet. Giverny, ceaseless source of inspiration for number of his magnificent paintings,is also, for Monet, the family cocoon where the artist does not hesitate to receive friends and close relations; like colonies of French and foreign painters, one of his most faithful admirer ,president Georges Clemenceau but also very often the Durand-Ruel family.

These visits go on today – in various manners but with always as much delight – thanks to the magic of the place which represents the house and garden of Monet in Giverny; due also to the Museum of Impressionisms, the garden even though very different in style, holds its own in beauty with that of Claude Monet’s garden. The White water lilies, which so fascinated Monet, are among the most sought after paintings of collectors today.