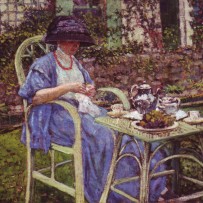 The fate of the American painters in Giverny was not yet determinated.
L. Metcalf, painter of the Julian workshop was a pioneer and led the way.Attracted to the scenic area of Vernon, admiring natural surroundings, he arrived in Giverny on a fine spring day, the apple trees were in bloom. He was so impressed by the beauty of the area that he wanted to sleep there and, as there was no hotel, he knocked at the door of the grocer’s shop. Mrs. Baudy opened the door. She told thereafter many and many times her fright when she saw this giant stranger, bearded to his eyes, asking for a room in a terrible gibberish. She only had her bed, and turned him away, double-locking the door.
A few months later, haunted by this delighted nature, he came back with friends of his workshop, but this time with his painting equipment, and decided, to sleep in Giverny, at whatever cost. Touched, Mrs Baudy gave up her room and stayed at a neighbor’s house. The day after she cooked for them and Theodore Wandel, Bruce, Taylor John Breck painted evening and morning with Metcalf. During this lunch they learned that Claude Monet lived in the neighboring regions. The connection was made between the French and Americans painters. They returned working at Julian, coming back each week end with other friends, also large, also bearded and also happy.
In 1887, the following year, Theodore Robinson worked with Watson, an English man coming from Saint-Louis ( U.SA.) and Dice, a Scottish.
Being successful with her business, Mrs Baudy set up rooms, the grocer’s shop become a hotel, full of joyous people lit up by the kerosene lamp.
She became fond of those big cheerful children, full of life, who teased, drank heavily and sang. The walls of the refreshment bar were covered by paintings. The lodging was cheap, but even not one of the painters could not pay his bill. “ You will pay next time « says Mrs Baudy and the painter left his paintings in deposit. Dice, a Scottish painter dressed in a kilt encourages everyone to dance festively to bagpipe music. The reputation of the hotel also begins to attract other painters of the academy Julian : Theodore Butler wasa thin and gangling boy, smartly dressed, and Durand-Ruel recognized that he was setting the tone for the Americans.

Impressed by the environment, he stayed in Giverny for the rest of his life, Carl Beckwith joined the group. Mrs Baudy do not know which way to turn, her son and her daughter in law started to help her to make the job easier she got from the famous Foinet from Paris ( at the présent day Lefebvre, rue Vavin ) some paints and paintbrushes. Dice, the Scottish, finding the tea atrocious got some from England andtaught the ritual to Mrs Baudy.He spent his time singing, drinking, laughing, and playing bagpipes, nobody ever saw him working. However, in the festive evenings, the group painted from nature. The garden sun decorated the fields, and Monet, alone, settled in Giverny to have some peace and quiet is unhappy. His daughter in law, misses Hoschede, does not share his opinion, pleased to have left the little house of Vetheuil.On days of festivities, Suzanne, the younger, dances with Butler.Radinsky (whose paintings are actually well known in Czech republic) has just arrived, plays piano all night long, and Dice teaches them the jig.
During 1888, Willard, Emma, Cherry, L.L. France, all painters, come to spend weeks in Giverny. According to the impressionist techniques, many painters worked in divided styles and brush strokes However, some are still attached to the academic school.Also, Mrs Baudy sets up a painting workshop in the garden of her hôtel. So that they can work with good lighting. The painters are so happy in Giverny that they even remain in winter.
Christmas Eve celebrations are joyfull.Disse brings puddings from England, and in the meadows flooded by the Epte, and covered with ice, the painters organize a magic night. Chinese lanterns hang from the willows like fantastic fruits, and on this dream skating rink, shadows twirl with whistling ice skates .Suzanne Hoschede laught and is pushed by a sledge built for the circumstance. At midnight all the skaters celebrate Christmas Eve in a nearby house. It’s an American Christmas with a traditional ham and turkey.
At this time, in Paris, there was a satirical publication called « le courrier francais « .the Americans reply to it, publishing with primitive means, le < Courrier innocent ».Watson is the Publisher and Richard Hovey, a new painter, covers the pages with poetic eloquence and full illustrations.

In 1891, while Monet, surrounded by paintings ( one for each lighting ), is painting the famous Grainstacks, Mac Monnies, the sculptor, set up his workshop. He bought the house in 1902 and went there regularly until his death.

From 1890 to 1900, when the pioneers go back to America, others take their place, rent houses, convert disused barns into workshops. The art critic Robert Chambers comes to study, C.C Rheinhaert, a specialist in art history, rents a villa, Murray Cabb, Louise Robins Richard, S.W. Nicolle, W. Dewb Urst, Olivier Herford, and Clinton Peters spend several months and paint paintings one after another.It’s a continuous comings and goings of Americans who start to move to Giverny. In 1892, Butler marries Suzanne Hoschédé, his favorite dancer, and buys a charming house.Ernest Peixoto, a young artist, comes several summers in a row, and until 1940, manages the School of Fine Arts of Fontainebleau.

The year 1929 brings the most important stock market crash that America never knew : Americans without resources leave Paris and Giverny.A few owners stay, they don’t want to leave the village and the France they love. Mrs Baudy sell the Hotel to retire in a neighboring house. She spent her final days among her memories, enjoying paintings given to her by the painters she so admired. Loved and cherished by this special “ second family”,who didn’t forget her, she died on September 6th, 1942, during the German occupation, without having the joy of being delivered by the Americans.